To Sale Or Not To Sale.

My blog for today is about being a salesman/woman. I have to say that my hats are off to all of those in this profession. I am just a woman at home with my kids and it is an experience.

A woman came to my door wanting me to buy organic cleaning supplies. When I said Hello to her she started to rap about her product. I do not mean rap aka talk either. She literally started to RAP! I found it amusing. Even my children came to the door and listened to her. Well she started to show me what she could do with this stuff. She even handed me a bottle and said here, this one is for you. And I was sure she was not just "giving" me the bottle but I thought that was weird. Thats when it started. She became pushy. Would not really let me speak much or denie her. If I said anything not in her favor she would turn it around and tell me how she could do anything with this stuff. She even told me and showed me how much money my neighbors spent with her. WOW. She made it so hard for me to tell her now. I was beautiful - my kids were beautiful. She said I looked like a model!! I am not kidding. She was "really" laying it on thick. Started to drive me crazy! I just wanted her to go. But she made it so hard for me to say no. I thought if I said yes - she would go away finally. But really - I did not want the product. So I told her to come back later when my husband was home. That usually works! They usually go away and never return. Not this woman. She came back at nine at night! My husband said.. well its all you. Now go out there and tell her no! So I went out.. Told her that I was sorry. She was so mad at me. Now she was rolling her neck at me and telling me that she keeps her word and I do not and she said "now I gotta go back out there and sell this bottle that I was saving just for you!" Not even true because she had just as many as she did when she came to my door the first time. At that moment I did not have a concern about how I was going to please her because I knew she was lying to me the whole time she spoke to me. She had so much respect for me when she wanted something from me and then when I was not going to give it to her - she was rude. (sigh) So the trouble I had was - I do not want to be like that. I do not want to push people into saying "anything" just to get me to go away. But if I am not a little pushy they will not see that actually Avon is not that bad of a product line. But- I do not push. So I feel like I am either Out if I do or Out if I don't. you know that old saying. Its really frustrating. So what I am asking from all of you reader - can you tell me how you like to be approached? If you like to be approached? Anything that I can work with! I sure would appreciate it

CreationsbyGena said…
Well, when I sold AVON I told my friends and family and neighbors but I did NOT push it on them. I hate that myself. I am not going to lie either. Yes, I did like most the products but hey Avon sells itself really. I am not one to go out and lie to someone to make them feel good to push a product on them they do not want.

Now, as far as my art and crafts go. No, I do not go door to door. Again, Friends, family and even a few neighbors know I am an artist and I have been asked to make them things which I usually give them a little discount. People I don't know either find me online or via the local craft/art shows I do. At those I talk to them when they come to my booth and I always have free candy out and have my postcards or business cards for them to take. Anytime someone buys something I include a personal note of Thanks as a special touch. Alot of times word of mouth gets my item's noticed and even sold. You have to believe in the product you are representing. I have fun with my art as it brings a smile to my face while creating it and I want people to have fun with it too.

I do not believe in a pushy method. Sure, you can get more people at once, but will you keep those people and most importantly, will those people refer you to others? I am sorry that lady was rude to you but she does not care. It is all about the volume of sales not about YOU the person. I on the other hand care about you and anyone else that comes into my life no matter how long or brief and thankful for them all. If I make money from it, then that is even BETTER! LOL and that's yy 2 cents worth. :)
May 13, 2011 at 2:42 PM

Frankie Stockman said…
Yeah.. Actually you know.. there are some things from Avon that I actually really like. I will not lie to people either. I let them know when something stinks! Only if I have used it though. If I have not.. then I tell them. I have kinda winged my way with the lipsticks though. I sounded good as if I knew what I was talking about. Turns out I was right! I was smarter than I thought! SHHEEWWW was all I could think. hahahah But I do not want to be pushy either. But then I think I might not be trying hard enough.. So its frustrating. The people that I have met so far on twitter blog facebook so far that have bought from me, I actually really like them and I did not push myself on them at all. Not once. We just talked. SO I guess I should just keep doing what I am doing. :) Just making good friends, being honest and myself. Sigh. Its tough though :) Thanks Gena :)
May 13, 2011 at 9:00 PM

amhersom♥ said…
Okay, well customer service, is a major thing. You must be agressive, but not crazy. It is STRICTLY about your customers.

You know the elderly LOVE avon! They will order everytime guarenteed, and employees do to sometimes. You may try that, or hospitals, schools, throw parties. and be you:) You are sweet, and softspoken anyways, very chic, and that is a major plus to you and what you have to offer:) Be confident, just go for it... sometimes you have to be very upbeat... like oober peppy... I do not know why but a good portion of women like it. You will get to know your consumers and see who likes the peppy poo and who likes the soft chic ♥ Dont think too much, you are great!

CreationsbyGena said…
Don't be to aggressive that = pushy.
Be yourself. If you enjoy and are excited about what you do/sell and you can show that to your potential customer you will be fine. You got to sell yourself Frankie and believe in what you have to offer. If you don't, it will never work.

Your post was talking about how this lady was pushy not letting you speak and rude after the fact. If you approach someone and they say not interested that is it. Don't push yourself! But before you turn and say bye, offer a business card, book, free sample be nice and let them know; if not now, perhaps in the future you can do business with them and thank them for their time. The one thing I hate about Avon is you order every 2 weeks. The elderly on my street (and I have many) did not buy every time they in fact were only 10% of my sells if that really. They live on a budget so you got to think of things like this. Least I do. But I market a different way. I am not in it for the MONEY, I am in it because I like what I do. I no longer sell Avon cause if I did not place an order every time and after 3 campaigns of not placing an order you are dropped not to mention the books rates went up etc. So, they really care about you As a company? And that is when I said I will not sell for them any longer. Talk about bad customer service. I still like the products and will buy, but never will sell for them again. ANd this was my 3 attempt with Avon. 3 strikes you are OUT.

SO I do my art and crafts and do decent with that. Hate advertising but it is just what yah got to do. Spend money to make money. The economy is down now so people do not buy much these days. Just remember, a customer will tell another customer about you weather bad or good so be good Frankie :) By the way... I would love to see you be more aggressive with your art!
May 14, 2011 at 6:08 AM

Frankie Stockman said…
Yeah.. My art work. I am hoping that it will pick up after Emily goes to school. Someone sent me a message on my you tube channel. It actually made me cry. She said "please make another video" my heart sank. I may be being over dramatic when I say it made me cry but I really love painting and its really all I want to do. But its one of those things that I just get frustrated because I want to spend my whole day on it but I can't. Emily needs my full attention and if I do not give it to her I end up getting frustrated at her and blaming her. Its not her fault. So I just stop. Not putting myself in that situation. Next year she may be in school for four hours a day. I will take that time to paint more.
May 14, 2011 at 7:10 AM 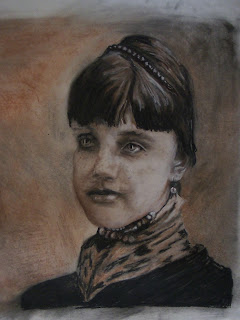