It was a gamble but I had to try something! Fixing a rip in the painting.

A couple of weeks ago I was doing a little showing at one of my friends stores - Time Passages Broken Arrow and I had an accident. I had asked my friend if I could show one of her paintings because I believed it to be one of my better paintings..  She agreed and then made me promise that nothing would happen to it. I promised. Who would have thought that I would be the one to rip it? 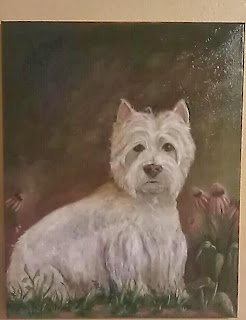 Here is the painting. Before any damages.

Here is the rip. It was so dumb how it happen! I was setting up the easels that I had bought to display the paintings and it slid down over the painting and just cut it like a hot knife through butter! My heart sank! I couldn't breath! I had to hold back the tears because I didn't know the people I was around and really didn't think they would understand and maybe accuse me of being over dramatic.
I ended up putting a patch on the back with some gesso.

I learned this from the internet. I took a small piece of canvas material (I used cross stitch material) and cover it in gesso then basically stick it to the back of the canvas over the ripped section. I set something heavy on it to let it dry. Took about 3 days before I dared to touch it. 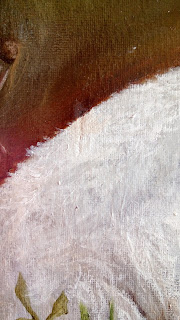 I could still see the spot where it had ripped so I then began to layer it with paint and match the colors. Soon I had it all nice and you couldn't see where it had been ripped. YAY! I was done! I saved it! Wrrong!

I had it sitting on a table waiting to dry and I think the cats knocked it down or something FREAK accident happen and when it was on the ground, I think my dog stepped on it and punched a huge hole in the upper left hand corner. I seriously thought I was going to have a nervous break down! I was pacing the floor.. Any painting but this one!! Why this one!?

This time the damage was much more so I had to rethink how to fix it. I learned a trick on the net that you can use Gelatin and chalk! It would make a type of putty that I could use in the front. First I had to do the patch on the back.. Same thing only this time I used none acidic tacky glue. it worked actually better. 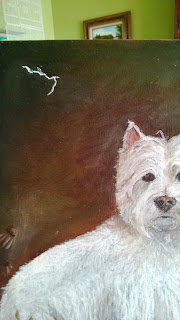 This is what it looked like after it was dry. Now for the putty... You can still kinda see the one on her butt but I had to wait for it to dry then I filled it in more with paint. Good thing that part of her was textured. It was the top part that isn't which I new would be much harder. 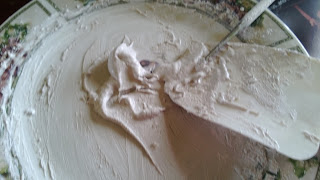 I couldn't tell you how much of it all that I used but I will say it was about 2 teaspoons of the gelatin and maybe a stick in a half of chalk. I crushed it into a fine powder with the flat part of my meat tenderizer. That was fun. 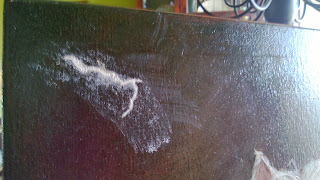 I started to fill in the cracks.. 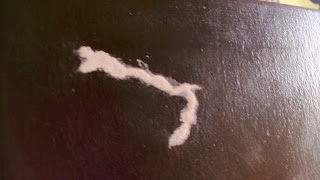 Let it dry nicely then kinda sanded it down. It did not come out right the very first time and I ended up having to make more putty (it goes icky fast and you can't save it) and doing it again. 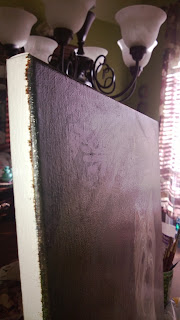 Finally I felt it was nice and flat and I could match up the colors again ... You can see a little spot there where the putty - I touched it and thought I could fill it in with paint. I couldn't but when its hanging on the wall you can't tell at all. Just if you are sticking your face right into it. 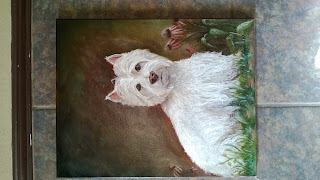 Here she is all fixed up. I know that the best way to fix the back is to fuse the fibers the best you can then use a glue of some kind to keep it together. Then once that dries you can do your putty and whatever you need in the front. I will need to practice that. I would really like to be able to paint and repair! Something for sure to look into. And my camera did not do the colors any good. It looks like junk. Setting me up for failure for sure! I assure you you can not see anything wrong with it in person. ;)

Another thing I saw was that instead of using the large patch you can use strips and pull the painting together like butterfly stitches.

OF COURSE the best way to take care of this is to send it to a professional to be fixed. IF You have the money. I didn't.

This is the worst experience so far. I have been turned down for shows and told that my art is not their "thing" and those both hurt... but now I know that it can get worse! This was worse....    I am glad its over.
First Time Orders FREE SHIPPING WITH CODE - FIRSTREP at checkout!
Frankie's Avon Page
Live a Healthier Life! Starting Today!
GNLD Vitamins 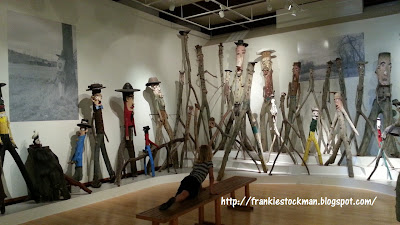